Sony has announced a 5-inch clip-out LCD preview display, the CLM-V55 LCD video monitor, intended to give DSLR videographers a change to see their footage in higher resolution than most camera screens provide. The 800 x 480 panel has a tilt/swivel mount that fits onto an auto-lock accessory shoe or ISO shoe, is powered either by an independent battery or AC adapter, and hooks up to the camera itself via HDMI.

It’s not just a dumb LCD screen, however; there’s a pixel magnification mode which ofers an enlarged view of a selected portion of the Full HD image, together with a colour peaking function that highlights the edges of accurately-focused areas of the video image. Meanwhile there’s adjustable aspect ratio (16:9/4:3), volume, brightness, contrast, colour tone (phase), colour temp and auto dimmer.

A mono speaker – and headphone jack – together with a sun hood round out the main specs. No word on pricing, but the Sony CLM-V55 LCD video monitor will go on sale in March 2011. 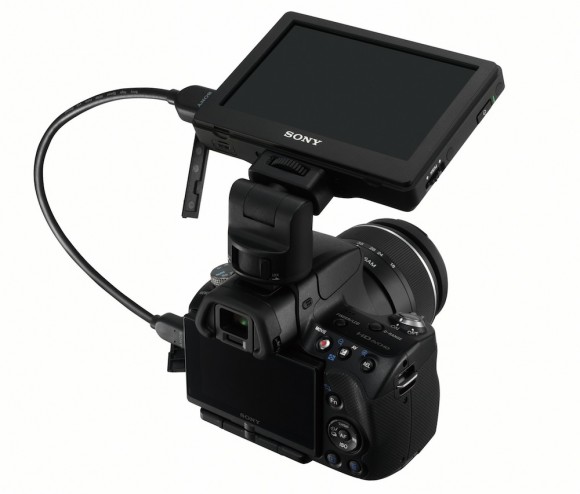